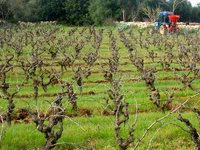 Situated to the south-east of Mallorca, ÀN Negra winery produces its wines on the old country estate of Son Burguera close to the town of Felanitx.  The buildings date back to the 13th century and have always incorporated an area for wine making in order to supply wine to local people living on or near the estate.  The cultivation of vines has been a constant feature over the centuries, contributing greatly to the Mediterranean island landscape, and has resulted in wine becoming an emblematic product of our gastronomy.

However, it wasn’t until the phylloxera plague ravished the French vineyards in the 14th century that wine production in Mallorca became an important part of the agrarian economy.  Felanitx is a paradigm as in 1919 the local wineries formed a cooperation with the shared objective of bringing together their produce to make production more profitable.  The magnificence of the building reveals the splendour of the economy at that time.  In the late 14th century, more than nine million litres of wine were exported from Felanitx.

The cultivation of vines, with all of its advances and setbacks and with an important supporting role in the economy, has become a traditional part of our culture.  Current wine making is nothing more than a continuation of our ancestral activity and it is against this background that ÀN Negra was born.  The first production initially made the most of the infrastructure of the old estate buildings. Since then, the improvement of our buildings has been constant and considered to be an indispensable condition for the making of quality wines.

The respect shown to the individual features of the soil and the cultivation of the indigenous varieties (manto negre, fogoneu, prensal and, above all, callet) has formed the basis of our philosophy in the way we approach our viticulture and this is reflected in the wine itself.  This philosophy aims to revive the original significance of an “appellation d’origine” as was first conceived in France in the 1920s, in the sense that wines should be made to reveal their own personality.

Born of the unique symbiosis of the climate, the land and the indigenous varieties, our inimitable wines are honest and distinctive and challenge the current trend of producing impersonal wine.  It is this premise, together with the aim of offering a product of the highest quality, that marks the day-to-day running of ÀN Negra.