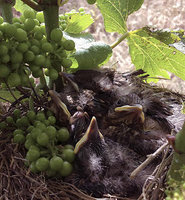 When evaluating a wine, the choice of grape variety is perhaps of secondary concern. One distinguishes the primary aroma of the grape variety from the secondary aroma, which depends on the type of soil on which the vines grew. Often it is not the choice of constituents that makes a wine taste the way it does, but rather where those component are grown, the microclimatic conditions in that particular location and the type of soil makeup giving nourishment to the wine plant.

At Son Alegre, we cultivate 15 hectares of vines on two sites, one on the edge of Santanyí in the area between Son Danus and Ses Angoixes, and the other in the nearby area of Can Taconer on the outskirts of Calonge. Both vineyards benefit from the Serra de Llevant’s moderating impact on climate as well as from the thermic conditions of the coastal area, at 7 km from the Mediterranean Sea to the South-East and 12 km distant from the West.

The particular meteorological conditions of our land effectively present us with average temperatures of one to two degrees Celsius lower than comparative terrains further inland. This is due to cooler air coming in from the sea and meeting with warmer air, heated up from the warmer land and thus regularly creating a fresh current of air during the hot afternoon hours of summer, a phenomenon known locally as s’embat.

Another shared aspect of the terroir at both of our sites is the Call Vermell soil, a clay loam formation soil containing plenty of iron oxide and lime. Our land is also interspersed with plenty of stones, characteristically preserving humidity that little bit longer than soil of a different makeup.

Wine growing for us is an on-going opportunity to accommodate our fascination with the wonderful complexity of the natural world. We employ classic methods of hands-on viticulture and oenology by practising only hand-harvesting, traditional basket press production, indigenous wild yeast fermentations, and fine French oak barriques for ageing.

We are in the process of planning to build our own winery to be located in the village of Calonge. Until the time of its inauguration, we are using the facilities and the expertise of our good friend Luis Armero of the Bodega Armero i Adrover in Felanitx to macerate, ferment and produce our Son Alegre wines. This collaboration began in 2008 and we are proud of what has been coming to the market since then. We are deeply grateful to Luis Armero and his set-up for the work and enthusiasm given to our products, combined with their devotion and tireless passion.