Meaning of the lateral tire registration 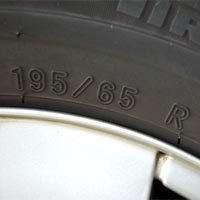 Surely you noticed that on the side of the tire contains a string of numbers and letters that is a code in which the main geometrical characteristics are defined rim . This inscription refers mainly to the extent of binding between tire and rim .
The dimensions are in inches, their equivalence in the metric system is: 1 inch = 25.4 mm.
The type of registration that we will usually be something like :
6 J x 15 H ET26 4/100
The first number indicates the inner rim width between flanges for cars is usually between 4 "and 9" .
The letter then refers to the flange profile , specifically its height. For the flat base and the letter B for better safety profile or honda base is used , the letter J.
The following figure is the measured inside diameter of the bead seat on the nearest part of the rim flange . This measure, for passenger cars, usually between 13 " and 17" .
The width and diameter are the main dimensions of the rim, are interrelated and influence the choice of the correct tires .
Equivalence between common rims and tires:

The next letter describes the type of profile or the base rate of the throat. For example :
H : Base honda ( Hump )
H2: Double deep base ( Hump 2)
FH : Flat hump
CH : Combination hump
SL : Special ledge
The following data is pumping wheel , the distance in millimeters between the symmetry line of the rim and the inside of the hub bearing plane . Pumping can be :
zero , if they match the central line of symmetry and the hub surface .
Positive ( outset ) , if the center of the cube is displaced outwards.
Negative ( inset ) when displaced to the interior.
This feature is important , since a variation in the pumping means to vary the width of the path of the car.
Finally , the number of anchor holes in the hub of the rim and the circumferential diameter thereof relative to the central axis of the hub or PDC (Pitch Center Diameter) is indicated .
Ler contributo inteiro
Comentários: 0
Mais sobre: Meaning of the lateral tire registration
Publicado em 05/12/2013 18:36 por Ckc Tuning

Now we have in stock the range of anti-theft products ABCLOCKS, consisting of a wide range allowing you to choose the most comfortable for you to protect your car or motorbike mode.
Formed by different types of security bars, rigid and flexible for both car and motorcycle, anti-theft screws and nuts.
We invite you to take a look at them on our website.

Arrived in Madrid in its final engine the most amazing spectacle and visual of all that exist in the world of cars and racing a drifting real exhibition (the art of cornering with the car fully crossed ) in which the main protagonists are the famous pilots of Monster Energy , the glamorous American rally driver Ken Block, legendary for its stunning " Gymkanas training " at the wheel of the most scenic rally cars as well as his colleague Vaughn Gittin Jr. , drift champion Formula D.

These two artists compite facel to face with the best drivers in Europe of specialty Rock City Arganda del Rey on Saturday November 2 , where we see the most insane cars prepared burning wheel .
Also add to this unique holiday Engine Buttsy driftingmundial legends Butler and Steve " Baggsy " Biagioni to shred tires along with the other competitors and others to be announced .
Finally , it has recently confirmed their attendance Spanish rider from Valencia called Attila, who created the first professional drifting team denominado Carbon - S , with impeccable track records championships behind as elCampeonato of Spain , 2011 , as well as the year of Catalonia , among many other titles , which certainly going to make war and we will do enjoy. In the following video you can see him in action at the Cheste circuit in Valencia.

Advance tickets are priced at 25 euros, with tier seat option for 10 euros and can be purchased through this link or in the mall El Corte Ingles in Madrid. Look what it says Ken Block ...
In the exclusive area of energy drinks Monster Energy cans will be served very cold , the players will be signing autographs and one attendee will win a co-driving laoportunidad around the circuit in no less than himself Ken Block ...Not to be missed!
Ler contributo inteiro
Comentários: 0
Mais sobre: European Final Gymkhana Grid: The best drifting in Madrid
Publicado em 01/10/2013 12:19 por Ckc Tuning 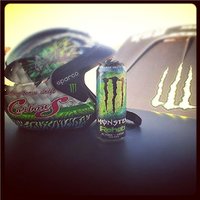